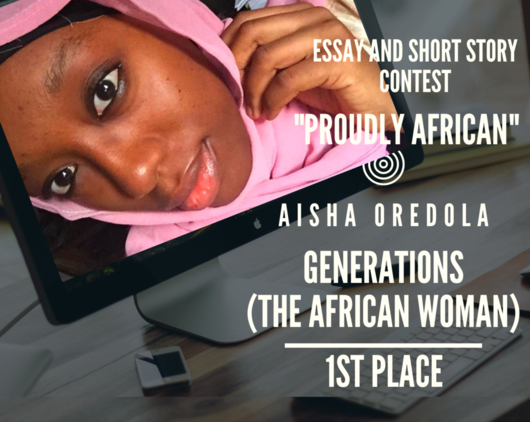 Aisha is, at heart, a lover of poetry and prose. With a B.Sc. in Cell Biology and Genetics, she has proved her mettle time and again. In no small way, she has developed a level of expertise and finesse that many writers dream of.

Taking an interest in writing at an early age was an escape for Aisha’s wild imagination. This led to writing short stories for classmates to much acclaim. Interests which started from cartoons and movies, soon fanned out to more literary works. The likes of Chimamanda Ngozi Adichie, Stephen King, Warsan Shire, Rupi Kaur, and Tomi Adeyemi have all contributed to honing her craft.

Aisha’s talent has not gone unnoticed; her works have appeared in the Kalahari Review, and the Brigitte Poirson Poetry Chap Book among others. Similarly, her irrefutable skill has landed her the first-place prize in Panacea’s Short Story and Essay Contest, May 2020 with “Generations (The African Woman).”

Aisha takes the bull by the horns with Generations (The African Woman). A mammoth of a story, words do it no justice. Nowhere else is the female struggle so ably represented and articulated in wondrous detail.

Her skill and dexterity are put on marvelous display with this work of art. The reader is left spellbound as Aisha wields the power of space and time; traversing centuries –generations- at effortless whim. The story speaks of the strength of women despite the efforts of men to break them.

Traditional, as well as societal, perceptions of the female gender are scrutinized, analyzed, and duly broken into fragments in this story. Again, I say, a mammoth of a story. If this is a sample of things to come, then Aisha Oredola would be a force to reckon with at her peak.

Through her work, Aisha seeks to communicate with her audience at a cellular level; to unearth the real issues and provoke thought, and action. By sharing her perspective and ideas, she hopes to influence people positively. She wants to tell the world stories about itself, to foster empathy and spread a message of hope.